We’re delighted to feature this labor of love on Kink Weekly from a new contributor. If you’re at all a fan of fetish art or erotica, then this book will be right up your alley. We are able to feature only a few snippets. You can order the full book here. 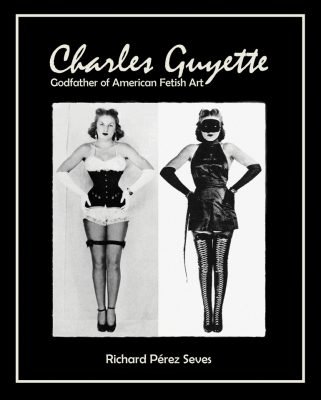 CHARLES GUYETTE (1902 – 1976) is rightly considered the godfather of American fetish art. In fact, his fetish art operation was the first of its kind in America, dealing in what was then generally regarded as “deviant” European-inspired material. In 1935, he was arrested and sent to federal prison. But what should’ve been the end was just the beginning. Although rarely credited by name in his lifetime, he influenced everyone who would follow him, particularly the publishers Robert Harrison, John Willie, Irving Klaw, and Leonard Burtman. The aim of this book was to evoke the spirit of Guyette—to collect surviving fragments of a decimated catalog largely by referencing vintage fetish publications from the 1930s through the 1980s and reconstruct a lost history. This portfolio of images is followed by biographical information seen nowhere else, and serves as a substantial introduction to the birth of American fetish art and the cultural impact of an unrecognized pioneer.

For those interested in the roots of fetish fashion that extend to the present day and fashion designers like Alexander McQueen, Thierry Mugler, Jean Paul Gaultier, Dior, this book may be of interest. For those interested in costume play, or those fascinated by mysterious masked ladies, corseted cuties, all sorts of exotic boots and shoes, this book may incite peculiar curiosity.

You can also learn more from this video.

About the author:
Collector and writer Richard Pérez Seves is obsessed with American vintage fetish art—and the work of pioneers like Charles Guyette, John Willie, Irving Klaw, Eric Stanton, Gene Bilbrew, and Bettie Page. He is also the author of the upcoming (2018) hardcover illustrated biography, Eric Stanton & the History of the Bizarre Underground.