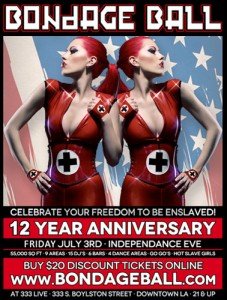 Marking its twelfth year, the Bondage Ball returned with all its highly anticipated fanfare and accoutrements. Organized annually by kink enthusiast Mr. Matthew Grimm, the ball attracts hundreds of party attendees as a pre-4th of July bash. Bondage Ball’s home for the last few years is the spacious 333Live; boasting large open rooms with multi-stories. This place has a few hidden spots in which one may sneak off and get into trouble. I had the pleasure of attending under the service of Lady D and her husband BootLickerG. Decked in our kinkiest get ups, we made our way over early to the festivities.

Bondage Ball attracts an interesting crowd. This being only my second year to attend, I could immediately tell a difference in this year’s crowd as compared to 2014. People from all walks of life attend in droves. The goth crowd mix with the ravers and all manners of sexual orientation, bondage, and kink fill the in between. It’s a place for D/s and curious vanilla to intermix. After being greeted at the door by Matthew Grim himself, my party and I entered the spacious main room. Neon-lit St. Andrews crosses decked out the main stage and there were play stations hidden in each corner. I immediately saw the sultry mistresses of Dungeon Decameron at their booth, ready to dole out spankings to a lucky few. Latex shimmered as they strutted and posed for photos; seeing Madam Quinn Helix and Ms. Rebecca Knox leading the pack.

We made our way around the room to stop at the bar. The party was just getting started with people trickling in. As we sipped cocktails, we witnessed a wonderful game of fetch by a puppy and her trainer. Both were very skilled and enthusiastic. A male dog and his handler came up to get photos with Lady D and myself. It was fascinating to witness their dynamic; the dog unable to speak but rather mime his request. Pet play was in full force and we were greatly enjoying ourselves.

The famed Nina Hartley of the adult entertainment and fetish film scene was an early arrival as well. She did not disappoint, taking the center cage to put on a seductive dance in her full body fishnet stalking. Fans stood close by to watch and others danced around to the EDM-style music pumping through the room.

Bumping into some friends, we made our way up to the balcony to snag some pictures by Manrique Photos. I knew in no time the line would be endless since this is an occasion to capture fabulous corsets, latex, and leather. Mistress Quinn popped in to grace us with her elegantly clad figure for a few photos as well.

If ever there were a party for the curious to attend, it would be Bondage Ball. It’s just the right level of taboo for the novice and a great gathering place for those seasoned veterans of kink to catch up. The performers started to begin on stage; even better for the newbies to either watch in fascinated horror or enthusiastic expectation. Master Eragon, a fixture at local dungeons and respected mentor of the community put on a wonderful display with his gorgeous and willing red haired submissive. The crowd responded in gasps of awe as he did all manner of whipping and electrical play with her.

Circling back down to the main floor, the crowd had thickened (no pun intended). We stopped by the retail booths to peak at their wares-the usual torturous tricks of the trade and some finely crafted leather goods as well.

We watched Ms. Rebecca Knox of the Decameron deliver some hefty floggings to an eager man as he posed over a horse. I said an enthusiastic hello to pupjethro who was in service to Ms. Rebecca for the evening.

A gentleman stopped to chat as we watched. Clad in a casual cotton t-shirt and holding a beer, he asked how I liked the show. I mentioned it was great and that I’m involved in the lifestyle myself. He said he “had friends in the scene” and just liked to “change things up” sometime. A self-described jeans and t-shirt guy, you can imagine my surprise when I glanced down and saw he was wearing full latex/pleather pants and running shoes. It was almost laughable and goes to show you can never judge a book by its cover. The moment fully encapsulated what Bondage Ball is all about; bringing people together from all stages of kink, culminating in one place to talk, dance, laugh, and explore. We began to say our goodbyes as Wry and his lovely girl took main stage for a fine display.

In all, this year’s event was a hit. The crowd did not disappoint in creative outfits. This would be a highly recommended event for the curious.