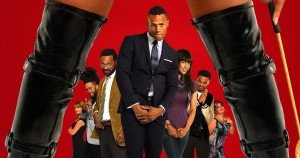 You may ask why do we care? Why is it important to note that other people make terrible BDSM films? It’s all about vanilla awareness and starting the conversation. I’ll get to that in a bit so hang with me. The first film, which in my opinion was so obscure if you blinked you may have missed it was Bound, released in early 2015, directly ahead of the first Fifty Shades movie. It was made in the style of a “mockbuster”-cashing in on the similar plot and genre to the mainstream Fifty Shades film soon to be released. Starring Charisma Carpenter (from Buffy!) as Michelle Mulan and some guy who looks and acts like the poor man’s Jamie Dornan (not that I’m a fan of his either) playing Ryan Black, this trainwreck shares many similarities to the Fifty Shades plotline. Spoiler alert: Guy hits on woman who is failing at her life and career, he now claims he owns her, she agrees for some unknown reason, some awful BDSM scenes, as it turns out he’s actually just mentally ill, and from here the plot deviates from its inspiration. Here’s the laughable synopsis pulled directly from IMDB, “The daughter of a wealthy real estate broker falls in love with a younger man, who introduces her to B&D and S&M. Using her newly awakened sexual prowess, she finally takes charge of her own life.” I recognized one of the dungeon filming locations as Los Angeles Dungeon West owned by pro-Domme Mistress Justine Cross. Too bad they didn’t bring her on as a consultant for the film, it really could have used the help.

Some positives did come from this movie. I will say the film showed us what a Dom IS NOT. The Dom in this movie is depicted as a disrespectful, petulant party boy drug dealer. Absolutely no one else in the film likes him including a fellow Dominatrix that Michelle meets in a dungeon. She actually goes so far as to warn Michelle to stay away from Ryan because he’s dangerous and makes “people like us look bad.” In all honesty, this doesn’t really happen in our community. For one thing, warning others about predators, proven or not can turn into a bit of a which hunt. But, I think our community could do a better job of protecting newbies and others from predators. Education is one step in the right direction. Awareness is another thing entirely. But in the end there will always be the question of why someone like Michelle would fall for a weasel like Ryan Black. The similarities to some of the horror stories we hear in real life about Dom/mes gone wrong are striking. It’s easy to fall into the desired fantasy and ignore the warning signs.

Moving on to film number two, a much more mainstream flick in its own right; Fifty Shades of Black. Yup, I sat through this one too. It’s not so much a mockbuster as it is a parody. Following the same plotline as it’s namesake, the story follows Hannah and Christian. The most interesting aspect of note is the characters’ references to Fifty Shades. At one point, Christian Black is torturing Hannah by reading aloud from the book. Hannah also references Ana Steele towards the end of the movie. The jokes are fairly mild, some of them only kinky folks might understand which I appreciate. But my take away from it is they were ripping apart the original Fifty Shades of gray movie. Hannah was depicted as a complete idiot and Christian was a nit whit, which is basically how the characters are in the original movie but they were being serious. This movie also made BDSM a bit absurd and exaggerated in a way but then again so did Fifty Shades of Gray.

So what does all of this boil down to? Well, I appreciate that BDSM is getting ever more mainstream. There are some in the community that do not applaud this effort but I find it can only assist in making what we do behind closed doors and in dungeons more acceptable and thus have fewer repercussions when something goes wrong or if the “wrong” person finds out about you. Almost everyone knows of at least one person in the lifestyle who’s had to deal with backlash after being outed. I personally know of several. But all of these movies, even if poorly representing the community as a whole still serves to make something “taboo” mainstream. We are well on our way to normalizing kink.