Home » GINA AND ERNEST’S PALACE OF PLEASURE AND PAIN 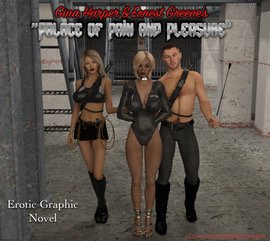 So what else is new?

After two years immersed in The Dark Lust of “The Truth About O (www.truthabouto.com)” with all it’s grim realities I felt the need to write something purely entertaining and sexy with no pretensions to profundity whatsoever.

The sexual tension is constant and the daily activities are imaginatively debauched, all captured in thirty-plus shockingly luscious and lusciously shocking images created by Gina Harper’s keyboard wizardry.

And you can view it starting right now in serialization on Patreon, the crowd-funded site for artists and writers, at  www.patreon.com/palaceofpleasureandpain.  Unlike the inmates you don’t have to do anything bad to gain admittance. Just five bucks per episode admits you to another chapter and another image from this entirely twisted and unexpectedly romantic alternate universe.

For the thirty weeks you’ll have something unabashedly pervy to which to look forward. Check your inhibitions and your clothes at the gate and check it out.

Spoken of only in whispers within the secretive circles where some of the world’s most desirable women are traded as voluntary sex slaves of the most dedicated kind, some think The Palace of Punishment is a myth. The rich and powerful Masters and Mistresses who own these precious properties inflict their cruel, depraved desires on them with a diabolical and ingenious assortment of mental and physical torments. It ‘s certainly not be beyond them to rumor the existence of a specialized prison where errant slaves are subjected to a merciless regimen that inevitably shapes them precisely to their owners’ preferences.   The mere threat of a tour of this highly specialized hell for women is enough to make most slave girls tremble, sweat and, most of all, obey. Most of the collared class would much prefer to believe that The Palace is just another nightmare with which to keep them properly frightened and humbled.

But an even more select group of young women can only wish The Pain Palace, as they call it, never existed: the inmates. Those who have been sent to this remote location, usually by private jets with the window shades down, served their sentences there, endured the harrowing routine of its unbending protocols and returned to serve in utter submission know too well how real the facility is.

In thirty installments cutting-edge render artist Gina Harper and ace BDSM fiction writer Ernest Greene take us inside the palace walls through the illustrated, narrated experiences of three women: Lola, Denise and Lisette, each of whom has been sentenced to this bizarre purgatory where agony and ecstasy are inflicted with equal enthusiasm by a staff schooled in the most sophisticated techniques. Viewers will see what these women endure and readers will know their responses to the experience by the end of terms spent in constant, naked, arousal and suffering as the strange intimacy of the cellblocks nurtures unexpected relationships between ruthless disciplinarians and delectable prisoners.

Each week, a stunning new work of art will appear, accompanied by a narrative no one less experienced in the ways of Masters, Mistresses and slaves could have written, until justice is fully served, raw and shocking.

When you enter these gates prepare yourself for a world of shameless lust and voluptuous cruelty where discipline and debauchery in every form are all in a day’s work.

Check it out now!