It’s been three weeks since Dexx and myself returned from the Burning Man festival in the Black Rock Desert. If you’ve never heard of it (you’d be surprised exactly how many people have no idea what it is) it’s a large gathering of people in the desert in Nevada. The event centers around art, community, self-reliance, and leaving no trace. Basically, you bring everything you need to survive and pack it all out at the end whilst having an amazing time meeting people, experiencing spontaneous events, and surviving.

Veterans of the festival say it can take a while to decompress from the week spent in the desert and I believe that to be true. I wanted to share some of our findings and highlights from the festival, despite immense preparation and hours of study on what to expect, I was extremely surprised by my week at Burning Man.

Dexx and I arrived in our RV on a Tuesday, two days after the official start of Burning Man. We also happened to be driving right into our very first dust storm. Nothing could have prepared us for exactly what a dust storm is like. If you’ve never experienced it, imagine the density of fog that is actually a heavy misting of fine dust and the resulting respiratory discomfort it can cause. It covers everything and requires you to wear a face mask and goggles. But just as quickly as a dust storm can blow in, it dissipates. The entire week, the longest dust storm lasted around 10-15 minutes but they can also come and go back to back making it extremely taxing to set up camp for example. We found our camping spot and spent the next few hours getting everything in order and battening down the hatches! Below is a photo Dexx took of our humble little camp amidst the storm.

I expected to feel filthy and dirty the whole time, with water being in short supply showers were non-existent, but the dust is so fine and the air so dry you’re never drenched in sweat. The dust helps to block the sun from burning your skin (along with a combo of a hefty douse in sunscreen). The only mess was my hair, which I had temporarily dyed purple and promptly put in a braid and did not touch the whole week.

Once we had our camp set, it was time to take an exploratory bike ride. Everyone brings bikes as a means to travel. The entire Burning Man camp referred to as Black Rock City is approximately seven miles wide so you can imagine how much time it would take to walk everywhere. My booty was aching by the third day and I was having to center myself from what I referred to as my “torture rides” on the bike. Not the type of pain I’m into! We passed sites such as the Orgy Dome, a ski jump, giant towers to be climbed and massive art cars; buses and more that have been converted into rolling pieces of art. After the first day, I opted to not wear pants for the remainder of the event as evidenced by the photos within this article.

We went to visit an actual 747 airplane that had been transported all the way out to the desert. It was an incredible site to behold, the shell of this massive plane sitting on the playa. 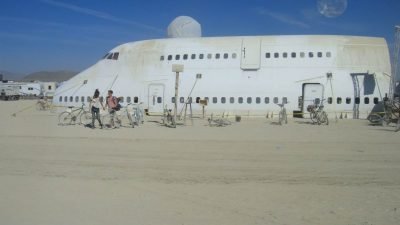 Before gaining entrance, people were required to go through a “TSA checkpoint” consisting of sexy ladies frisking everyone. I got a swift smack on my butt and a boob grab but I was happy to oblige.

There was also a sign that clearly laid out exactly what would be prohibited on the “flight.” The inside is converted into a lounge and dance space. You could also fill out your baggage tag with your actual emotional baggage and leave it on the wall of the plane. We thought that was a nice touch.

At night the playa is lit up by all manner of art cars, camps, art installations, and bikes! It was incredible to see the rainbow of color and creativity behind all of it. The human race is an amazing thing.

I took a chance and spontaneously decided to participate in the beer mile on Thursday morning. The race required each person to chug a beer every 400 meters. Sound easy? It’s totally not! They required each person to carry a vomit bag with them just in case. No, I did not end up having to use mine and yes I did complete the race with a respectable time of 19:45. I didn’t even come in last place! The unfortunate side effect of chugging four beers in 20 minutes is that you are in fact wasted afterward. I ended up having to walk my bike and myself back to camp to sober up. It was pretty comical.

All in all, we had a wonderful time. It was dusty, difficult, surprising and most of all wonderful to see all of these people existing together in this space with an open mind and no judgment! It was kind of like being in a more vanilla version of a dungeon, a safe space where everyone could just be themselves.