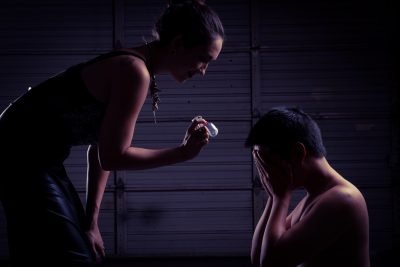 Reader: I love it when my Domme marks me, like with a cane or a crop, but we’re both nervous about the legal ramifications. What if people see the marks? Should I hide them, and if so, how?

Baadmaster: Before I get to the “what if people see the marks?” part of your question, I have a few observations about marks! Many subs love to be marked by their Master/Mistress or Dom/me. Marking seems to have a kind of “ownership” aspect to it, which can be very hot. Many subs only allow their Dom/me to do it; marking being a hard limit in casual play. Marking seems to have a direct lineage to the “suffering for your Master” ideal as romanticized in “Story of O” type lore. It is, no doubt, a powerful show of Dominance and submission. To those who do not engage in this type of play, I suggest that light marking, as opposed to the more serious types of marks, can be very exciting. Try it; you might like it. That said, let’s get to the legal ramifications aspect of your question.

Unfortunately, there are legal consequences of marking in a visible area of your body — especially on a female. In many states, just the appearance of discernible bruising is considered a priori proof of abuse. The criminal justice system works in reverse here. You are guilty — and treated as such — until you are proven innocent. Although consent in some states is not admissible as an excuse, and you should study your state’s laws, most DA’s will not proceed in these cases. In many jurisdictions, it is fairly easy to establish that it was consensual play — but only after the fact. And, it is the “after the fact” part — which can include arrest and the cost of a bail bond — that can be a royal pain in the ass. I personally know of a case, in California, where a neighbor called the police when she heard a slave’s screams during a BDSM session. The police came to the door, saw a reddish beginning of a black and blue on the slave’s thigh, and took the Dom in. Even after both explained the situation to the cops, they said they had no choice — California law dictated that the “husband” had to be arrested. In the end, no charges were filed; the case was dropped. But the Dom did spend a night in jail. I have heard many similar tales of woe.

If you are concerned about people seeing your marks, or live in a very backward jurisdiction, another popular way of “marking” a submissive is with, duh, a marker! Writing phrases like “Property,” “Slut” or “Whore” with a Sharpie can add a lot to the D/s dynamic — almost as much as actual marking. And there is no physical danger involved (unless the submissive is allergic to Sharpies, a very rare condition.) Still, one must negotiate what areas might damage the submissive’s psyche. For example, the sub might object to “Whore,” so one should be aware of your sub’s hard psychological limits.  But at least you do not have to worry about Johnny Law. Use “Sharpie Sadism” until you get a few days off and are able to play with cane marking; then you will have time for the marks to disappear.

Thus, I advise that you never allow vanilla people to see your marks. Cover up. Wear a long sleeve shirt even in hundred-degree weather. Use thick covering makeup. Better to be viewed as a weirdo than as a victim of abuse. Nowadays, America has become a nation of tattle-tales. And with all these accounts of spousal abuse on the Internet, people are really looking to report potential crimes. In your case, chances are most of your vanilla co-workers or friends would ignore your marks. Remo Gaggi, the mythical Mafia boss in the movie Casino, always counseled, “Why take a chance?” I advise similarly. Given the severe consequences, no matter how remote, “why take a chance?”

There is one other caveat I must offer in terms of marks. Most times, contusions do not appear until a day or so after the session. The Dom/me should be experienced with the bruising tendencies of the submissive. Some subs mark very easily; others mark only with hard hitting. Thus, the Top should take these factors into account during play. Keeping in mind whether the bruises are in spots that are easily covered up is also a must. The consequence that a hard-to-conceal bruise might have is one consideration an experienced Dominant should be aware of.

Finally, there is one other aspect of marking you must not overlook. Marking can be awesome. So, have fun!