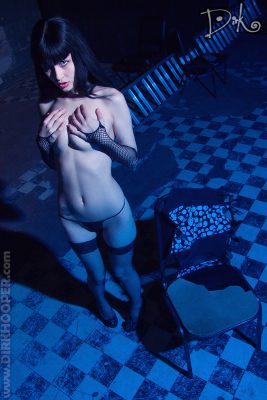 I watched them through my hiding place. I took refuge behind a pine tree. I tried hard to save my energy for when they would be on top of me. I could outrun them in short spurts. Long spurts…not so much One of them was a woman with wild, blonde hair. She had brown eyes that could pierce one’s soul. She was tall and had an athletic build. She reminded me of the Amazon warrior women from Xena:Warrior Princess. The other was a man. He had short, dark hair with stumble on his chin and glacial blue eyes. If you stared into his eyes, it would feel like falling into a vast, deep, light-blue ocean- like the ones you see in the Caribbean. His shirt was off and he was heavily muscled. Sweat glistened off his chest. He wore tight, jean shorts. They both were barefoot. It made my feet hurt just by looking at them. However, if they lived like this often, the bottoms of their feet were heavily calloused and probably didn’t feel much. They wanted me. They saw me as a piece of meat…and not the kind you eat. The kind they wanted to ravage. The kind they wanted to control. I could tell by the gleaming look in their eyes when I first encountered them. It was my fault. I had stumbled onto their land out in the forest. I had been hitch hiking. I was running away from the life I had for the last ten years, which was filled with emotional and verbal abuse, and my ex-husband cheating on the side. It didn’t matter if I was homeless, carless, and penniless. I was free now. Accidentally, I had come across an apple tree that was part of this couple’s property. I thought it just grew naturally on the border of the forest. Once they saw me on their premises, I thought they were going to shoot me. A hunting rifle was pointed right at me. I begged them not to kill me. “What makes you think we’re going to kill you, girl?” The man asked me in a southern drawl. “Um…the gun pointing at me?” “This doesn’t have bullets. It has pellets. They hurt like the Devil, but they don’t kill ya.” “Oh,” I said in relief. “However, you’re trespassing on our property,” the woman said. “I’m sorry. I didn’t know this tree belonged to you both. Please don’t call the cops” They both chuckled. “We aren’t going to call the feds, girl.”“We prefer to play with trespassers,” the woman cockily mentioned. “In what way?” I asked nervously. “We’ll play something that I can only describe as the adult version of hide and seek,” the man replied. “Hide and seek? So, we just play that and everything is fine?” They both busted out in laughter again. “No, gírl! You run as far as you can from us. Then, my wife and I will hunt you. If you can avoid capture inside our property, you’re free to go. If not, you will be ours.”

I felt my heart climb into my throat. “What would that entail?” “Trust me, it’ll be fun. At least for us,” the wife said gleefully.   “So, girl, you up for a hunt?” growled the man. “What if I don’t want to do this hunt?” “How cute,” the wife mused to her husband. “She thinks she has a choice in this.” I could feel my heart beating in my throat. “Okay…I guess I am.” “Good!” The husband said happily. “Better get running!”