In my opinion, in the short term, the answer is definitely yes. The excitement of a new poly relationship is much like the “honeymoon” period of any liaison. And it works for a while. As to long-term polyamory, that is a bit more problematical. BDSM relationships between two people are notoriously short-lived. When you add a third human being into the D/s mix, you are just complexifying (my word!) an already hard-to-maintain relationship. I am living testament to this sad truth; I personally have gone oh-for-two in long-term triads. (Of course there are many long-lived, wonderful poly relationships. But these are the exceptions, not the rule.)

So why is polyamory so difficult? In the typical poly relationship with an alpha and a beta slave, someone is voluntarily accepting being lower on the totem pole. The concept of “I live for my Master/Mistress and will serve him/her as the “beta slave” works fine in theory – or online! But this is a hard mental space to maintain in real time. Most people, in any type of relationship from fetish to vanilla, like to be ‘numero uno’ with respect to their significant other. And the alpha, although first in the pecking order, still must learn to share the Master/Mistress. For both submissives, this is easier said than done.

Unlearning ego, jealousy and possessiveness, which both the beta and the alpha slave must do, is extremely difficult. But although it is difficult, it is not impossible. In order to override these natural needs, both slaves must ultimately embrace — whether through training or other means — their respective statuses.

I might add that in the poly world the most popular arrangement seems to be an alpha-beta hierarchy for the submissives. But there are other polyamory systems. The alpha-alpha structure of two equal slaves is another way of setting up poly. As I had stated in a previous article, I believe that an “alpha-alpha” system might be easier to maintain for the Dominant. If the Dom/me can divide his/her attentions somewhat evenly, resentment can be eliminated as a divisive issue. After all, there is no “beta slave” who, by definition, gets less attention. I think this is less adversarial to human nature than alpha-beta and likely easier to maintain in the long run. But this is just a guess. We are dealing with human relationships here, not science. And many other systems keep popping up as people experiment in ways to make poly work.

As much as I love poly, I truly believe it is antithetical to basic human nature. It requires work to overcome this hurdle. A lot of work. If a Master/Mistress has accomplished the formidable task of finding/training two slaves who are totally happy serving, I believe it is less about the system/hierarchy than about the basic compatibility of the three people. I think this is the key. You can talk about alpha/beta or an alpha/alpha type arrangements until you are blue in the face. Ultimately, my two failed attempts at long-term poly were unsuccessful because the people involved weren’t comfortable with each other over time. And that is the key.

Getting two people to be intimate over a long period is tough enough. (Just look at the divorce rates.) So imagine the odds of three people getting on in a demanding D/s arrangement. “Is long-term poly possible?” The answer is “yes,” – but it might take a while before three ultra-compatible lifestylers are found.

Want to know the right way to do poly? I have the answer.

The answer is…….there is no right way! Sorry.

There may be a right way for one person, however, that may not be the right way for another, or anyone else for that matter. One part of “doing poly” is how you describe your poly. What words do you use to describe various partners, metamours, or yourself?

It seems that the hierarchical terms of “primary” and “secondary” were pretty accepted universally (back in the day). This acceptance seems to be changing. Many poly folks do not like these terms because it makes it sound like a “primary” partner is more important than a “secondary” one. So there have been a few solutions to this. One is finding different terms. One I like is “anchor partner” or “nesting partner” (yes these would take the place of various types of primary partners). Others do away with terms altogether.

I would like to state my personal opinion, however, which is counter to the popular one. I am, personally, not offended by the use of primary and secondary. I was in a relationship triad where I was the secondary partner, or “third”. For me it helped form my role within the triad. I knew what to expect as well as what was expected of me. I never assigned a “less than” meaning to it. It was more of a descriptor of my role. In my current relationship status I have an “anchor” partner, or primary, and I am with someone to whom I am a secondary partner and she is my secondary partner as well. She has her own primary (or nesting partner) – since they share a home. Our relationship is different than my relationship with my primary and it’s different then her relationship with hers. Different is ok. It doesn’t mean we aren’t important to one another. If I need to go to the hospital, my anchor partner is most likely the one to take me. If I need to discuss financial issues, etc – I am more likely to discuss it with my anchor because it effects his life more that hers. It just is what it is. I also see my anchor partner almost every day, while my secondary partner and I see one another when we can, however, due to our schedules and distance it’s usually only 1-3 times a month on average.

My opinion is that if it acts like a duck and quacks like a duck, it’s probably a duck. And that duck is no more or less important that another swan in the pond – only different. I also realize that some poly tribes honestly have no hierarchy – no life crossovers (finances, kids, shared household, etc.) and so hierarchical terms don’t fit anyway. I also understand that many people don’t like the terms because it sounds like they imply better or worse.
My opinion is that words hold the weight that you assign them. I have never attached value to these descriptors – only used them as an easier way to explain the situation and relationships I’m in.

Just like everything else with poly – come up with and use words that work for you and your people. 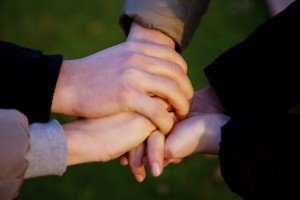 Since jealousy is such a destroyer of unions – from the most vanilla of vanilla to 24/7 Master/slave relationships – I will try to examine how jealousy intrudes into Polyamory and how best to handle it.

Whenever lifestylers discuss jealousy, there is invariably a person who says, “A slave who is jealous is just poorly trained. A good Master/Mistress should be able to eliminate most of it in a slave.” There might be some truth to the statement, but totally purging jealousy, even by an experienced Dominant, is unlikely. Jealousy seems to be an irrational human emotion programmed into all of us, to a greater or lesser degree. Even if a submissive is not a particularly jealous type, once another sub is brought into the picture, jealousy will almost invariably rear its ugly head.

If you have read my previous articles, you would know that I am not a fan of the typical “alpha slave/beta slave” arrangement. Unless both parties enthusiastically endorse their respective roles, this might not be the way to go. This is where understanding both slaves’ psyches is of utmost importance. Before the Dominant brings in a second slave, and calls her/him the “beta,” he/she should make sure that this is what both submissives want. Yes, there are those submissives who truly crave being either first or second in the pecking order. But many Dom/mes often assume, when adding a second slave, that this slave is the “beta” simply because she/he is the newer one. And that the so-called “alpha” is happy with a second slave. Dominance is not the antidote to jealousy! What often happens is that this slave, who might not be cut out to play second fiddle, is really just hoping to eventually become number one. And that the “alpha” is hoping the beta just disappears!

Jealousy can lead to a strategy that many Dominants are unaware of. By assuming the position that requires more sacrifice, the beta can create the appearance of being the more submissive of the two. This can get make the alpha extremely jealous – especially if the alpha perceives that this “ultra-submissiveness” is captivating the Master/Mistress. Then, if the jealous alpha gives the Dom an ultimatum, “It is her/him or me,” and is not careful in the way this request is phrased, it could easily backfire and lead to the dismissal of the alpha. Thus, a conniving beta sub can manipulate jealousy to completely ruin everything. I have seen this scenario happen far too often – once even to me! — to think it is just coincidence.
.
Although jealousy and competition between slaves is almost impossible to eliminate, an alpha/alpha system appears to minimize jealousy. Here, the Dominant can give attention to them in the proportion that each one needs. The Dominant (and it is the Dom/me who is setting up the rules) can thus adjust his/her attentions from day-to-day, week-to-week, and month-to-month, as the situation demands and is not stuck treating one as “numero uno.”

Jealousy is difficult to eradicate in a one-sub relationship; imagine how much harder it is to eradicate it with two subs. By all accounts, Poly is the shortest lived of all BDSM unions. Keeping this in mind, I suggest understanding what roles the subs are most comfortable in and work it from there – rather than try to push them into a dynamic that they really despise. My personal opinion is that jealousy can best be managed when a Dominant is aware that it lurks around every corner of the relationship and works hard to keep both subs feeling secure. (And, of course, the subs should try to keep their jealousy in check!) Being aware that jealousy can never be eliminated – and staying vigilant in addressing jealousy and nipping it in the bud as quickly as you can – is the best way to control, but not eradicate, jealousy.