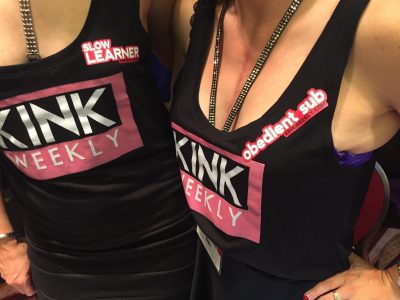 I was only able to make it to one class, Victorian Style Birching, as I was manning (womanning?) the Kink Weekly booth and boy was it a good one! I’ll talk about it later in this article. I also had a chance to walk around the vendor floor and check out some of the crazy inventions that people come up with. The sky is the limit and I’ll never stop being amazed by the devious and cunning minds of these kinky crafters. My partner Dexx was in his element as he fancies himself a kinky inventor of torture devices, some of which have been featured in past Kink Weekly shoots.

I wanted to share some of my finds with those who were not able to attend. Perhaps you’ve seen some of these items before? Or maybe you’re one of these inventors; to you I say well done, Sir or Madam!

This one was a bit tongue in cheek. Orchid and Serpent scored the mother of all butt plug holders (does anyone out there have enough butt plugs to even warrant a butt plug holder?) with this discarded child’s toy turned amazing use of up cycling! Yes, that is a Barbie Doll game. Yes, those are all butt plugs inserted into each hole of the Barbie Doll game. The story goes that one of the owners of Orchid and Serpent spotted this toy at a garage sale and as the kink minded are often known to do, a “pervertable” was found! Some may think it’s inappropriate (but we don’t hang out with those people) I call it genius!

Master Gabriel, the mastermind behind this piece has finally outdone himself. You may know him as the maker of the Composition Book paddle and also having a penchant for making his submissives kneel on Legos. This double flogger provides double the impact. Just when you think the flogger strike is going to end, it is quickly followed by another one all in one motion. His household members at the booth were kind enough to give a demo. This toy is used with a rotating motion of the wrist that is actually quite easy to master. I was also impressed that the flogger falls did not tangle amongst themselves. It was one smooth double whammy!

While Orpheus is typically a seller of knives for edge play, I was delighted to see this item at his booth this year. You read correctly; it’s an ankle and a vagina so a vajankle! When I was told the name of this specific toy, I cried with laughter. However, someone is into this particular kink and that’s ok! The feet are sold as a set with the second one just being a fake foot, sans the vagina. I’m also happy to report that on the third and final day of DomCon, the vajankle had been purchased by a lucky attendee.

Bugs!-I did not get this vendor’s name! If anyone knows please let me know in the comments!

This booth was full of creepy crawlies, but luckily they were all diseased or I would have been out of there…or maybe burn the place down. Check out those spiders and bats! They were all encased in solid glass which would make for a great conversation piece. But now that I’m thinking about it, they would also be good for the sadist because if my Dom stuck one of those on my face I don’t think I would be pleased! 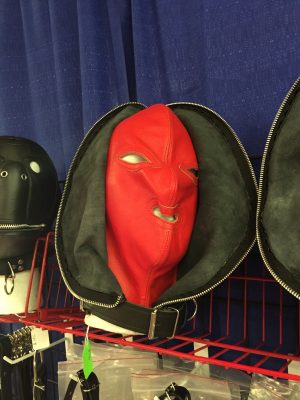 Just in case you need a hood in side a hood, Edgeplay Gear has you covered (no pun intended). I think this hood is for those huge leather enthusiasts mixed with a bit of asphyxiation. You can over your sub’s head and then zip them up inside the dual masking feature. Tighten the collar for added terror! It reminds me a bit of Texas Chainsaw Massacre with “Leather Face!

Never in my life have I seen a flogger of this magnitude. Even the largest Fox Flogger I experienced in New Zealand could compare. It reminded me of a witch’s broom, except it packs a much bigger punch. Getting hit with this bad boy was akin to getting kicked in the butt, hard! I had to make sure I was stabilized enough to sustain the impact. Our booth was across from Tawan’s and we got to watch people getting walloped all weekend long! Hilarious!

“The Mistress Molly 3 Loop Extreme” made by Caniac.com and Miss Molly

I’ve seen a lot of impact toys, but nothing quite like this. There was quite a bit of weight to this piece, making it super effective. Miss Molly from New Hampshire nicknames this one “her baby” as she spent significant time crafting the design and layout. She says, “It’s all hand made by a wonderful married couple from Massachusetts and comes with a lifetime warranty. I worked with Caniac to develop the “The Mistress Molly Red Line Extreme” toys, which as the name indicates are their most severe implements they make. Not for your beginner spanko!” You’ll receive no complaints from me! She was also accepting donations for Alhpa Dog Rescue and portions of her proceeds also go to that rescue group; anything that helps animals is aces in my book! 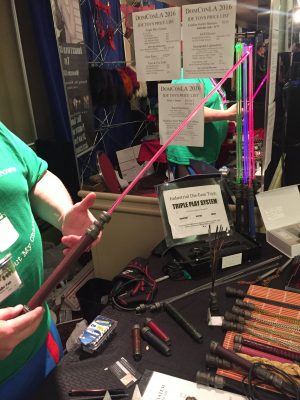 There must not be much to do in Wisconsin or else these guys are just really clever. They have a whole stock of stuff that looks like you could beat the shit out of someone (consensually of course), barely have to exact any effort, and leave wicked marks. All of their products are made from pipe, chain, and anything else metal. Their floggers were pieces of pipe with ball chains attached yet they still looked elegant and well crafted. These weren’t the dinky chains that come with necklaces-this was heavy duty, watch your ass kind of stuff. I was also presented with a demo of the light saber cane! It has interchangeable color tubes so you can be a Jedi one day or a member of the Imperial Force another. Definitely toys for the sadistic!

Chris of Torrid Timber has beautiful, handmade items ranging from paddles to spiked coasters. But by far the most impressive piece were his slave stocks. Need something to completely immobilize your slave? Stick them in some stocks with ankle cuffs and chains and they won’t go anywhere! This elegantly designed, modern piece has an easy to use locking mechanism that is cleverly out of reach from the subject wearing the stocks. He was also sporting a tray with a removable bottom to allow the subject carrying or holding it to feel tiny little spikes. It’s genius design offers minimal effort if say your submissive is a human table with the tray on their back. Just keep adding items on the tray to increase the level of discomfort. We can’t wait to see what he comes up with next!

As I mentioned I was only able to attend one class; Victorian Style Birching or as the instructor Daddy Johnny likes to point out, a class on sticks. But do not be deceived! This implement is one of the most punishing a bottom can ever experience! It’s basically a bundle of sticks, often treated in a saltwater brine tied or taped together. Then the Dominant takes them and wallops the submissive as many times as they can stomach. It is not for the faint of heart or light bottomed. Twigs fly everywhere and it often opens up the flesh in tiny (or not so tiny) micro cuts. A shower is recommended after to get all of the stick particles out of the cuts or you can elongate the subs punishment by holding off on the shower for a little while. Daddy Johnny delivered an extensive and fascinating history on birching followed by multiple live demos from himself and Sir Valentino. At the end of the class, you even got to make your own birch rod. Birchen Boutique also has the more historical version of the stocks, made with intricate and beautiful designs. One of the demo bottoms was also sporting the “shrew’s fiddle,” a parallel version of stocks. I give major accolades to the demo bottoms in this class, as it was not an easy one.

I’m sure there are many more crazy inventions where these came from. Kinksters are known to be creative and this only further proves this theory. What kind of things have you all seen? Any off the wall toys or equipment? We’d love to hear about it in the comments!