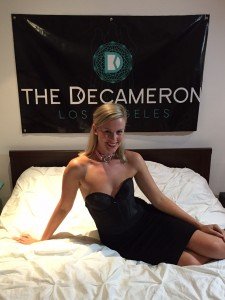 The Decameron itself is very cozy and boutique located in Los Angeles. I give an enormous amount of applause to Mistress Lucy and Mistress Iris for their impeccable taste. This is not your typical red and black, dark dungeon space. The area boasts a bright and beautiful color palette of gray, yellow, and blue tones. There was definitely plenty of inspiration for Dexx and I to pull from for our own playroom plans. The furniture, constructed by Downtown Willie is both elegant and serviceable including a convertible cage/padded bed and also a wall with hard points that is a secret murphy bed. The play space opens up onto a private outdoor deck including a four-post bed and bathtub. While I was not lucky enough to take a dip, I can only imagine the debauchery that one could embark upon!

Serving as a wonderful photshoot location, the space also doubles as a great party venue. That evening, Dexx and myself returned to The Decameron for the 1010 Party. I was quite nervous; somehow knowing this would be different from the familiar crowd at the local LA dungeons. The 1010 Party was advertised as a place for “a new kind of kinkster.” The crowd was to be personally invited and curated by the mistresses themselves. Upon arrival, we were not disappointed. Having been warmly greeted by Mistress Lucy, we were shown in to find that The Decameron had been opened up to include the entire spacious apartment for party-goers to roam and play. There was a gorgeous assortment of food and drink, being judiciously tended to by any number of male slaves.

Dexx, always encouraging me to meet new people, introduced us around to some new faces while greeting a handful of familiar friends. Mistress Lucy and Mistress Iris gave a wonderful champagne toast, describing the origin of the name The Decameron as well as some history. The Decameron comes from an eponymous Italian book by Giovanni Boccaccio about the tales and exploits of seven women and three men (equally ten) who sheltered outside of Florence to escape the black plague.

While the crowd was well balance, because of the regular play parties I usually attend, I had not had the pleasure of witnessing so many beautiful and talented FemDoms in one place! It was so much fun watching them interact with their slaves. The party attendees were all exceptionally friendly, having met all of the hostesses for the evening including a lively chat with Ms. Rebecca Knox and Ms. Grace Marie.

We were told that this would become a semi-regular event to occur every two months or so. We surely hope this will be the case!

For bookings and information visit their site here.