The first time playing with a new play partner is special.  There is a magical electricity in the newness and uncertainty as you begin to connect with each other through dominance & submission.  As you experience each other’s energy, there is a delicious joy in seeing how your new partner responds to your unique style of dominance.

When I’m preparing for a first play session like this, I normally have a few things I’d like to have as an outcome from the scene:

Here’s a simple outline for where to take your scene, which accomplishes all three of these goals and sets you on a good foundation for more fun play in the future.

Now that you’ve had a great first play experience, you can start to plan some more advanced and intense experiences for future scenes together, built on the foundation of trust created from an amazing first session.

I think at some point in our lives we all find ourselves in a situation where we don’t know what the fuck is going on. For me, this “situation” started when I left my wife and just…kept…going. People say in times of hardship we find out what we’re truly made of, but I don’t think anybody would have guessed that inside of me was a masochistic submissive biding her time until relationship Armageddon. It takes a lot of courage to try new things, but if you’re curious about the kink community and you want to get started, here are a couple of things I learned in my first month that my mother definitely didn’t tell me about bdsm.

The receptionist buzzed me in. I sat down on a plushy couch and reflected on the fact that my therapist’s office looked less inviting than this room did. A working submissive emerged politely from a back room to whisper something across the desk, and then the receptionist stood up and encouraged me to walk into the back room where a support group was meeting. Everything looked and smelled clean…almost clinically so. And the collection of people I saw as I took a seat on one of the last empty red poufs looked completely, 100%, no questions asked, normal.

You read that right. Normal. I usually detest the word and everything it stands for, but in this specific case it was a relief to see real people who were smiling, murmuring to each other, and looking around with non-judgmental curiosity. This wasn’t frightening at all. Not one person stood out as threatening, predatory, or even remotely vampiric. It was somewhere around this moment that I got hit with a major reality check: everything I thought I knew about bdsm was a lie. What I’d seen on TV was a lie. What I read in books was a lie. And now as I sat here surrounded by other people who shared this big, scary secret with me, I realized in the best possible way that I was not alone. Things stopped feeling scary. Who I was stopped being secret. And I started living my truth unabashedly.

My advice for newcomers is as follows:

My biggest fear was that somebody might take advantage of me if I wasn’t on the defense. What I found instead was a core group of kinksters who wanted nothing more than to help me grow, but I had to let my own guard down long enough to see the helping hands all around me. Remember this: no matter how insecure you might feel, at the end of the day we are all just people. Awesome people with leather floggers and spanking benches, but people nonetheless.

There are a million and one ways to explore the scene, but hopefully these pointers help you navigate the space as you start your kinky journey into the unknown. If you have any questions or you’d like to reach out, feel free to contact me on my fetlife account at little_miss_eden. Thanks for reading! 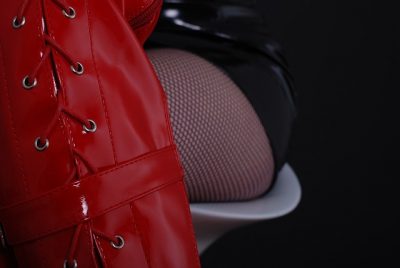 I get asked by friends all the time, “Jenn, don’t you get tired of teaching the same basic stuff over and over?”

To that I say no.  The reason I don’t get tired of what I do is for many reasons.  I am giving info and providing opportunities that I wished I’d had when I was new, seeing people discover new things makes my heart super happy, and staying in touch with new folks week after week keeps me in touch with when I was new.  I think it’s important to remember what that was like – otherwise it’s easy to become jaded, frustrated and even judgmental.  What becomes second nature or common knowledge to us is often foreign to a new person.  There is a learning curve here.

So having said all that I wanted to go back to my first ever public play party.

When I started in the scene I went to classes and munches and spent much of my time in the rope world and the spanko world.  I got involved with a spanko group (which still exists) that, at that time, consisted of private parties in the group leader’s residence. Then one of the members of that group hosted a spanko party at a dungeon.  I decided this would be a safe entry into the dungeon play party world because at least I would know a few people.  This party happened to be held at a well-known dungeon in North Orange County here in SoCal.

I pulled into the parking lot in my family size SUV and I just sat there for a while.  The address I punched into my Garmin took me to an industrial business type building so I had to double check my GPS like 25 times to make sure I wasn’t in the wrong place.  Then I noticed people starting to arrive.  I scoured their clothing and noticed that most of the women were wearing things like sundresses or flowy knee length skirts!  I panicked.  I looked down at my tight denim mini skirt and 6 inch stilettos and I immediately doubted my choice of outfit!  Would I stand out like a sore thumb?  Had I worn the wrong thing? Before I let myself give in to the panic and just drive home, I decided to text the one person who I knew was at the party and that I actually had a number for.  (It happened to be the leader of the group at the time.)  I told him I was parked outside and afraid I’d dressed inappropriately.  I asked him to please come out to my car and tell me if I was right.  (yes, he was nice enough to leave the party and come out to calm my fears)  He laughed on his way to the car, shaking his head, and once he saw my outfit he assured me I would be completely ok. He walked me in and we went inside to where the party was happening.

The first thing I did was make a friend – a cute girl in pigtails and a cheerleading outfit – because at least she was another person not in a casual sundress!  She and I sat and hung out and I realized that there was a reason for all those sundresses and flowy skirts.  This was a spanko party and they were easy to flip up!!  Lol  Oh was I relieved!  It wasn’t about a dress code or what outfit was appropriate, it was just easier access for what they were there to do!

After that realization I relaxed, met more people, including some from a class I’d been in a couple weeks before, and had a good time.  There is more to the story but I covered the point of this article.  Your first public play party can be scary and overwhelming.  It’s ok to admit that and to reach out to a friendly face.  It’s also good for veterans of the scene to remember this if you are the one they reach out to!