Then, be sure to check out this informative video brought to us by Depraved Eros! This week he tackles everything Electric Play and teachers viewers how to perform this type of play consensually, ethically, and safely. 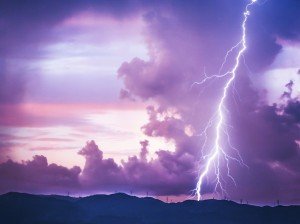 Kathleen looked up at the clock on the wall for the third time in as many minutes, 6:57 pm seemed like an eternity away from 7 especially since she was nervous about the stranger coming over to give her a massage. She examined herself in the mirror as she put her long red hair up in a bun. Irish and German stock gave her a pleasant curvy figure just on the rounder side of a size ten. I may not fit the “Sports Illustrated” definition of dead sexy, but from any angle I do pretty good, she thought to herself.

“Trust me girls, you want your boyfriends to watch.” said Megan with a sly wink which elicited a round of giggles from the other girls. Kathleen felt uneasy, partially because she knew that Megan and her friends were a tad more adventurous in life than she ever hoped to be, and partially because the background of this particular gift certificate seemed to be a human radiating lightning bolts.

The chime of the grandfather clock brought her back to reality, but no sooner had the chimes stopped than a knock at the door gave her a start.

“Hun…your masseur’s here.” she could hear the hesitation in her boyfriend Carl’s voice. She paced back and forth, hearing those words over and over again, you want your boyfriend to watch. Why? Would getting a back massage really be something worth watching, surely not.

Finally mustering her courage Kathleen opened the bedroom door and walked out into the living room where she was greeted by an odd sight. Maybe she had been watching too many daytime dramas, or maybe it had been wishful thinking, but the man setting up the massage table was certainly not the burly Italian youth she had been imagining. In plain terms he was…well… plain, maybe even a little on the homely side of the sex appeal chart.

“The name is Neil, I’ll be your masseur tonight. Sorry I was a bit late but my last customer ran a little longer than scheduled.” he shook their hands and after brief introductions busied himself with unpacking an odd assortment of objects and set up a portable massage table.

“So which of you two am I going to be working on? The message you left me didn’t state a name, though you both look a little tense.”

“I’m your patron tonight.” said Kathleen “although I was wondering, would it be OK if Carl watched?” the last line spilled out almost unbidden.

“Well of course, massage is by nature a intimate experience and when couples are involved I like to cover my ass and keep the partner in the room that way its harder to be accused of doing something that could get my license revoked. Incidentally both of you seem a little befuddled by my toolkit here. Do you know what it is that we specialize in at energize body-works?” Kathleen and Carl simply stammered various typical spa treatments and were met with a wry smirk.

“Well sometimes its easier to just show than try to tell…oh is there a place I can plug in?” Neil seemed to be playing with some sort of large device he had strapped to the leg of the table and soon after he had found a convenient plug attached what appeared to be a long rope of chain-mail which he handed to Kathleen.

“Grip this tightly, good, now touch Carl’s nose.” a buzzing noise issued from the strange device and a slight tingle welled up in Kathleen’s hand as she reached out to do as she was told. “This has to be the oddest thing I have ever done to a boyfriend at some strangers request.” thought Kathleen.

Suddenly Carl recoiled, holding his nose and giving her an injured look. Neil laughed and reached out a finger as he turned a dial on the contraption again. Now the buzzing was louder.

“This time, reach to touch my finger, but don’t quite make contact.” The calm in his voice was soothing and even a bit intimidating, but curious now she did as she was told. The resulting crackle was a surprise, but the strange lightning that arced from her fingers to his buzzed with an odd mixture of pain and pleasure.

“That neat little trick was brought to you by a man named Nicola Tesla. I use it along side standard massage techniques to stimulate endorphins in the body while simultaneously relaxing stress away. The result is a body that feels re-energized, pun fully intended.”

Carl, still nursing his nose, beat Kathleen to the question “How the heck will zapping somebody make them feel good? All it did there was scare the crap outta’ me.”

“Fair enough question, just like runners high or the euphoria felt by people who get tattoos, the body has a funny reaction to pain. If you know what you’re doing you can create lots of endorphins with just a little pain and reap results far beyond what just traditional massage alone can achieve. So shall we begin?”

Neil produced a long white spa robe with his company logo and asked Kathleen to change, and to wear as little as she felt comfortable with, making sure to take off all metal jewelry. Kathleen decided leggings and panties was as naked as she would be getting for a stranger and after a time she rejoined the two men, who in her absence were huddled around the toolkit.

“Oh goody we can get started, oh and you should know that I don’t start my work timer until I get down to business.”

Neil instructed her to lay face down on the massage table with her head rested in the opening and her arms at her sides. He carefully pulled the robe off her revealing her milky white freckled back. Kathleen shivered, partly because it was cold and partly because this was the most naked she had been in front of a stranger. All that apprehension melted away as hands slick with some warm oil pressed gently onto her neck and began working their way down her shoulder blades to her lower back. After a what seemed like a blissful eternity, the chain-mail rope was put back into her hands, its cool metallic feel was dramatic opposed to his now almost hot hands

“OK now’s when things get different, if you don’t like anything I’m doing you only need to shout the word red, and I’ll stop, orange and I’ll turn down the power, yellow is more of a warning to me that you are getting close to your threshold of pain and green means I’m good to go. She watched as he knelt down and selected some sort of metal comb, it looked like the kind she used to use on her neighbors long haired mutt dog when she was growing up when it got mats in its tail. There was that buzzing noise again and suddenly pinpricks of fire were dancing up and down her spine.

“Orange!” She shouted, and then the buzzing got quieter. Again the comb was brought to her back, this time however the pain was much less shocking, it felt like she was walking the edge of pain and pleasure. An involuntary moan escaped her lips as Neil passed the comb up and down her arms, which prompted more attention there.

“See, less pain than deep tissue massage, no bruising like you get with cupping and any amateur can do it. Hey Carl, do you care to give it a try?” asked Neil, that same nearly mesmerizing tone making the words hit home like a ton of bricks. “We’ll work together, I’ll massage her whilst you play with the tools from the bag there.”

With her face resting in the hole of the massage table Kathleen was unable to see what was going on but the shuffling of feet let her know that Carl seemed to be receptive to the idea. Again Neil’s hands worked their magic across her lower back, all the while small pinpricks of heat rolled up and down her body.

“I bet you never thought you would use a whisk like that did ya?” said Neil to Carl and both men laughed.

The effect of both pain and pleasure on the body is a strange one and were it not for the crackle and zapping of what ever tool was in Carl’s hand the massage surly would have put her to sleep. Conversely the pain from the tiny lightning storm all over her back wouldn’t be the sort of thing she ever would have put up with, but those hands strong hands would soon pass over the area spreading warmth and wiping all her tension away.

Suddenly the grandfather clock chimed from the other room making her keenly aware that half their time was up. Good god, she thought, that was only thirty minutes? She was now so relaxed that her head lolled from side to side as Neil worked on her shoulders and she was shocked when a moan escaped her lips…where had that come from? Both men chuckled and Carl even went so far as to ask if she needed a minute to herself.

“Sorry boys, but if I cant control my breathing how do you think I would be able to do anything with my arms?” she flopped her arms comically off the side of the massage table and with a bit of a thud impacted the tool bag.

The implements spilled out onto the floor directly under Kathleen’s face. She was surprised to see things that looked more at home in a medieval torture kit or the kitchen filled out most of the ranks in Neil’s bag of goodies. Then something caught her eye.

On the inside of the bag there was a nearly concealed pocket, which her blunder had exposed the contents of. Unbeknownst to the men working above her she was now staring at what could only be described as a large glass cock, and the more she tried to not think about it the more her eyes seemed drawn to it.

Neilias Elision is an Oregon based kinkster who found his way into the scene whilst exploring TENS and violet wand treatments as alternative medicine. He enjoys giving demonstrations in the rogue valley for both kink and scientific curiosity.